​You will live down the hall from adults at SMUS called houseparents. The Senior and Senior Assistant Houseparents live in their own apartments connected to each boarding house.

Almost all houseparents are members of staff, providing continuity between your life in and out of the classroom. At SMUS, being a houseparent is a chosen role. This means it is not an obligation to them but something they enjoy doing.

Mrs. Doland and her husband Brady (Mr. Doland) and their five year old daughter, Kaya, and 2.5 year old son, Levi, live on the first and second floor of Winslow House. It is Mrs. Doland’s 12th year in boarding and second year as the Winslow Senior House Parent. Born and raised in Calgary, she moved to Victoria in 2010 to complete her Varsity Track and Field career and begin the adventure of becoming a teacher. Mrs. Doland spent her first year teaching a family with four children as they travelled all over Europe, before settling into her career as a Grade 6 Math and Science Teacher at the SMUS Middle School.  Her husband, Mr. Doland, teaches P.E. at the Senior School and, fun fact, they are Middle School sweet hearts! They both have a love for travel and look forward to adventuring the world together as a family.

Ms. Emmett has been in boarding since 2017 and lives on the third floor of Winslow with her partner Mr. McCloskey, and their dog, Tsuga, as the Senior Assistant Houseparent. Ms. Emmett was born and raised in Victoria, BC, the traditional territories of the Lekwungen (Songhees and Esquimalt) and W̱SÁNEĆ People, and loves spending time outside, camping, kayaking, hiking and doing yoga. She has a degree in Child and Youth Care and a Masters in Counselling Psychology. She has spent many years working with children, youth and families doing therapeutic adventure, adaptive recreation and counselling. In addition to her role as Senior Assistant in boarding, she also works as the counsellor at the SMUS Junior School. She loves to travel, and her adventures have taken her to Australia, France, Mexico, Costa Rica and the United States, with many more countries on her list of places to explore. Her husband, Mr. Jake McCloskey, is a teacher at the Middle School, a houseparent since 2013, and a SMUS alum. They welcomed twins, Ocie and Arlo, to the world this summer and can’t wait to introduce them to their Winslow family in the weeks and months to come!

Katie Marti has been at SMUS since 2016 and currently teaches Grade 8 Humanities at the Middle School. She is originally from Mi’kma’ki/New Brunswick, but has lived and worked all across Canada – from guiding dog sled trips in Algonquin Park (Ontario) and facilitating heliski trips in the mountains of Revelstoke (BC), to working as a chef in an off-grid wilderness lodge way up in the Yukon. She loves all sorts of outdoor adventure, but some of her other passions include playing music, writing poetry, and hanging out with her enormous cat, Ted, and her sweet puppy, Betty.

​​Ms. McGrath was raised in Nelson BC, arguably one of the most beautiful cities in Canada where she learned her love for nature and the outdoors. Growing up she enjoyed anything to do with sports and excelled in ski racing at a national level.  She is the mother of a 23 year old son who she enjoys doing all sorts of fitness with. Ms. McGrath worked in the public school system for 18 years as an Educational Assistant and as a house parent to international students. In her spare time she loves traveling, hiking, water skiing, soccer, cooking and spending time with friends and family.

Ms. Morgan Ambrose (she/her)
Ms. Ambrose hails originally from Treaty 7 Territory in Southern Alberta, home of the Blackfoot Confederacy, TsuuT’ina, and Stoney Nakoda First Nations. She loves being outside and has spent the last 15 years working as an educator and guide in the Rocky Mountains and along the coast of Vancouver Island. Her longest and most interesting work has been with a wilderness-based, youth residential addiction treatment center. She’s stoked to have been recently certified as a guide with the Association of Canadian Mountain Guides.
Ms. Ambrose has been moving around for the past number of years and, as a recent arrival to Victoria, is looking forward to settling in and attempting to learn how to sail. She also loves to dance, read, and have conversations with people about anything they are interested in! She has recently graduated with an MA in Conflict Analysis and Management and is building a career as a family mediator.
She lives with her partner, Mr. Lyster, who is working as a houseparent at Barnacle House, their dog, Fin, and their daughter, Noa, whom they welcomed into the family this past summer. They can all be found exploring outside in rain or shine. Ms. Ambrose feels incredibly fortunate to live and work within such a generous community at SMUS and can’t wait to spend another year with Winslow folks!

Born and raised in Winnipeg, Manitoba, Mrs. DeMelo moved to Ottawa in 2008 to work as a Page in the House of Commons and study at the University of Ottawa. After completing her undergraduate degree and a one year exchange in Spain, Mrs. DeMelo moved to Montreal to start her Master’s degree in Hispanic Studies. After many years of working in non-profit organizations serving newcomer and refugee families and youth, her love for teaching languages brought her back to Winnipeg to complete her education degree in 2017 at l’Univeristé de Saint-Boniface. After teaching Spanish and French in Winnipeg, Mrs. DeMelo’s adventurous spirit has lead her to SMUS to teach Spanish, and she couldn’t be more excited! She and her husband, Mr. Barahona (a Bolton House Parent) just arrived in Victoria and are looking forward to kicking off their first year in boarding with their dog Nanuk.

In her spare time, Mrs. DeMelo loves to dance, bake, practice yoga, cycle, hike, play soccer, foster recuse dogs, and travel. She can’t wait to learn more about you and make this year the best it can be!

Ms. Schalkwijk was born and raised in Johannesburg, South Africa, and has a Bachelor of Education degree in sciences and mathematics from the University of Johannesburg. She has taught science and mathematics at schools in South Africa, Saudi Arabia, and China since she began teaching in 2014. Ms. Schalkwijk immigrated to Canada last year, and taught in the SMUS senior school science department, and will be joining the senior school mathematics department this year. She is an avid birder outside of work, loves the outdoors and a good book. She is also involved in The Duke of Edinburgh’s International Award and enjoys leading outdoor trips through the program. 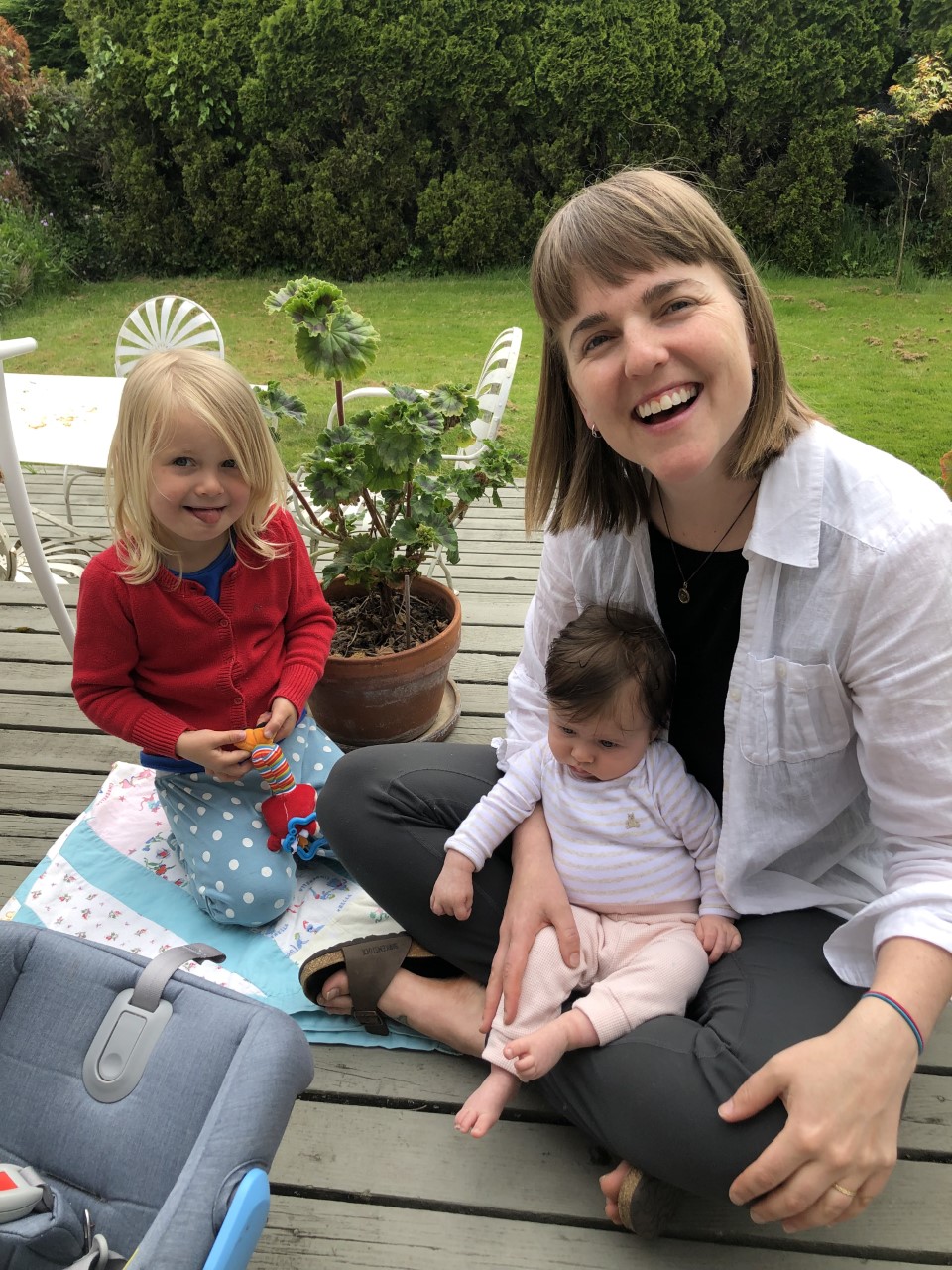 Ms. Adamson, born and raised in Calgary, Alberta, has called Victoria home since 2008 when she attended the University of Victoria to study Theatre. Following graduation, her passions for travel and teaching led her to spend several years living and teaching in both Vancouver, where she obtained her B.Ed at UBC, and in the Middle East, where she taught at the American School of Kuwait. Now, living just five minutes from the school with her husband, Mr. Lampard (SMUS Sr. School Social Studies teacher) and their two daughters, Freya and Chloe, Ms. Adamson is thrilled to be teaching English 10 Plus at SMUS and joining Winslow House as an assistant houseparent. In her spare time, Ms. Adamson loves to get away with friends and family for a nature hike or beach walk; spend time dabbling in her latest passion, gardening; or chow down on some popcorn while watching the latest season of Ru Paul’s Drag Race. Most importantly, Ms. Adamson is so excited to join the wonderful community at Winslow House and help make this the best year ever!