It has been a dynamic couple of weeks here at SMUS as we honoured Remembrance Day, enjoyed a long weekend, and participated in lots of activities on campus, around Victoria, and even farther afield! Some boarders took a trip to Seattle, others went on a university tour of schools in Ontario, and everyone took part in our third House Games of the year. In addition to all the fun and games, folks have been working hard in their courses as term two comes to a close, rehearsing for a very unique production of Hamlet, competing in various tournaments and championships, and putting the finishing touches on college applications.

With only four weeks left to go before a nice, long winter break, spirits are running high and the countdown is definitely ON!

We also said so long to one of our lovely house parents, Carol Adamson, who has been covering a maternity leave since the beginning of the year. We are thankful that we’ll still get to see her on campus, but we’ll definitely miss her abundance positive energy and enthusiasm in Winslow House. Thank you, Ms Adamson!

It’s been a busy start to term 2 to say the least, hence why you didn’t hear from us on the blog last weekend! Wow, everyone has hit the ground running for this new term and there has been a lot going on around the house these last two weeks.

The Junior B volleyball team won their Bumpkin Pumpkin tournament. Nice work!! Saturday was a full day first with activities that included Quest Reality games escape room, a walk to Pelicana restaurant for some food, visiting the annual Goldstream salmon run, a trip to Galey farms, and yoga. The day finished off with a very spooooky haunted house with lots of great scares and decorations by our very own Charlize, Taeeun, and Fay.

This week began with an epic Halloween parade during our Monday assembly. Some house highlights for costumes included: Natasza as a beautiful corpse bride, Claire as a fantastic teletubby, Ava as the legendary Drake, Amelie and Juliet in cozy moose costumes, Renata and Sihara as Disney princesses Snow White and Belle, and not one, not two but THREE Adam Sandlers from Ella, Ilona and Charlize. In the early evening, students trick or treated in Bolton house.

Howlapalooza (open mic) was a great end to the night. Renata was amazing on the drums, Natasza and Micolaj did Polish rapping, and Ella and Claire performed a great rendition of Ice Ice Baby.

What a week for our senior field hockey team! On Friday this week, in the cold wind and rain, the team played in their final championship game. SMUS counter attacked with two minutes remaining on the clock, which resulted in an equalizing goal to send the game to penalty shots. In the shootout the SMUS players were cool, calm and collected and came out the victors and thus became the provincial champions for the first time in thirty years! What a legacy for this team to leave behind. Well done!

Lots more coming up in the next few weeks! Stay tuned 🙂

Term one comes to an end as the weather gets cooler and the leaves on campus change colour.  It has been a busy week in Winslow House with lots of studying and preparing for final assessments.  Last weekend’s Saturday activities included a visit to the Butchart Gardens, Victoria Royals Ice Hockey Game, Needle Felting and Halloween shopping.  On Sunday we had our second House Games of the year, and enjoyed working as a team on such a beautiful, sunny day!

We had a delicious house dinner this past Thursday at Laila Laila, and enjoyed Hotpot together.

SMUS hosted a variety of fundraising events this past week to raise money and awareness for childhood cancer and treatment. Our very own Alexa Li donated her long locks to the cause.

Everyone enjoyed a well deserved relaxing weekend and most aer excited for the new term to start.

We had another great, busy, sunshine filled week! Our grade 10 students went on their out trips and had some pretty awesome adventures that included paddle boarding, sailing, hiking, rock climbing and surfing. The grade 9’s embark on their out trips this week followed by the 11’s next week. The grade 8’s had a lot of fun at the Luxton Fair in Langford and participated in a textiles and plant dyes workshop in Sydney. There was also a jam packed open mic night on Friday where some of our Winslow crew performed. Finally, for Saturday activities our junior students enjoyed a stroll up Mount Tolmie and some ice cream sundae making in the common room. Check out some fun moments from this week in our pictures! Hoping for more pictures next week of the out trips!

Is it really almost October? Wow, this month has flown by and what a wonderful start to the year it’s been.

This week marked our first full week of the new school year. Our studies and extracurricular activities are back in full swing. After a busy week, we kicked off the weekend with a very Winslow-like dance party, featuring some Just Dance videos and our house favorite, the Fitness Marshall YouTube channel. The common room was packed with students from Winslow and Barnacle and laughter and conversation were heard throughout the house. The rest of the night included Taylor Swift sing-a-longs and funny YouTube videos with the students dancing and singing right up until check-in.

On Saturday, grade 8 to 10 students participated in a baking activity led by Ms. Marti. Sunday morning, we all bussed down to Dallas road to participate in the Terry Fox Run. It was a great experience for our  boarding community to be involved again after a three year break during the pandemic. The Winslow team ran and walked with full force and was committed to the cause and meaning of the run. It was a great and uplifting experience for our community, allowing us to build on our team spirit with wonderful energy and cheering from the Winslow members. It was a memorable and inspiring day!

It has been incredible having the Winslow House full and buzzing with energy this past week. The Grade 12s arrived on Monday and quickly got to work getting the house setup for the new boarders and did a fantastic job welcoming everyone. The first week consisted of ice breaker games, welcome assemblies, first two days of classes, movie night, house picnic and the week closed with House Olympics and a community chapel. Check out some of the photos below! 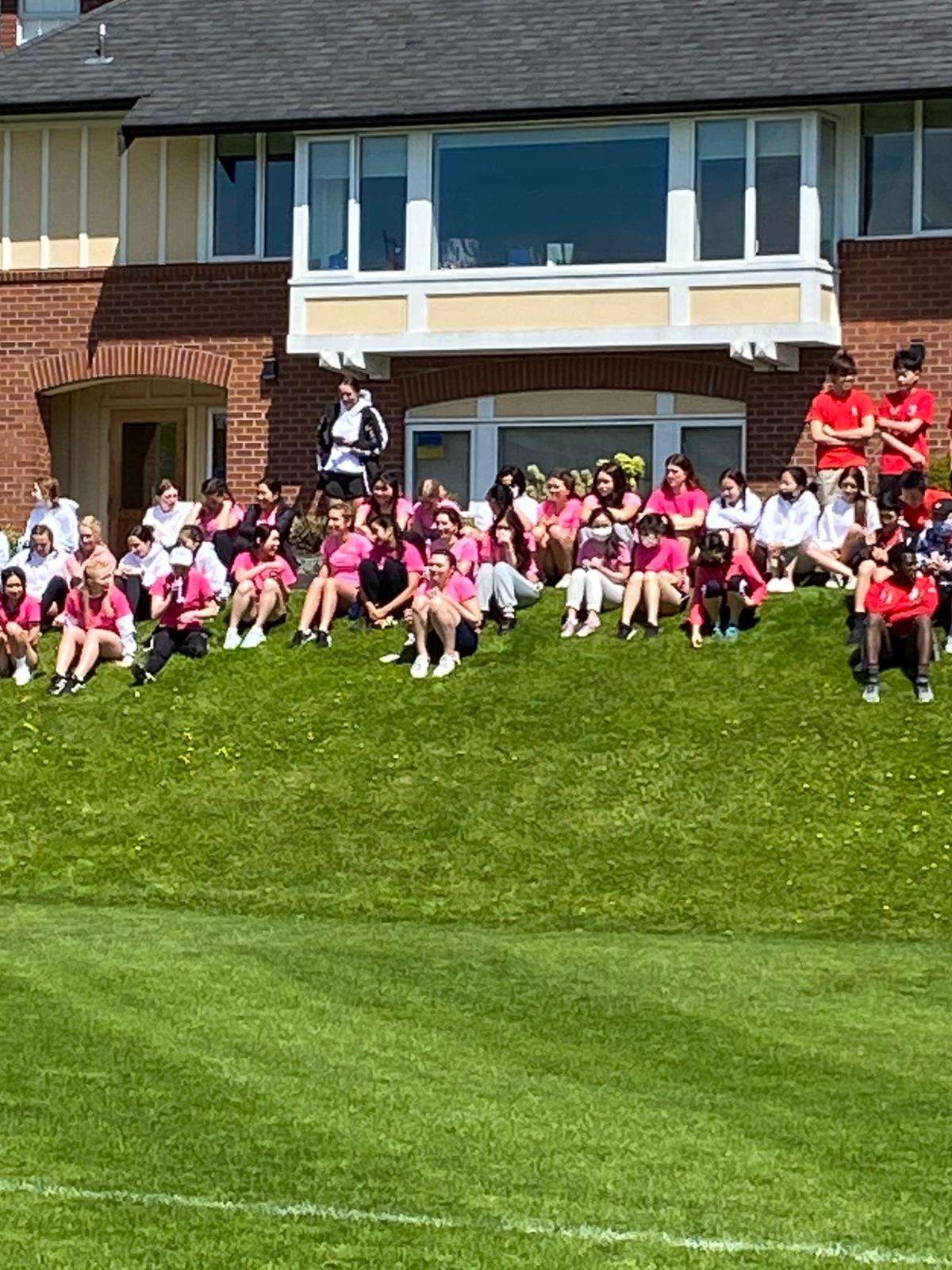 We have come to the end of our show here, at SMUS. We, the House Parents, are so so grateful for the incredible spirit of this House and love our Winslow Family so very deeply. Goodbyes are hard, and after a super successful week of sports and academics coming to a close, we had our final chapel and “goodbye” to our Grade 12s and our “leavers”. It was an emotional roller coaster, to say the least, and one which we will ride through this final week. A big shout out to our graduates! A big Ms. Ambrose and Ms. Emmett, who are due over the summer, and a huge thank you to Mrs. Doland for leading the House all year.

Winslow was all over the map this week! From hiking trips and the annual Oak Bay Tea Party to championship soccer, rugby and rowing finals, we have lots of stories to share and successes to celebrate! This weekend was extra busy as we started to prepare for the end of year transition by getting bins and luggage out of storage, organizing donation bins, and packing up our rooms for the summer and beyond.

These next two weeks are going to fly, but we look forward to squeezing every last minute out of our time together as a Winslow Family 🙂

This wild and wonderful ride is nearing its end. This past week was filled with birthdays, assignments and the itch for summer was definitely present! We rallied as a House BIG TIME this weekend, as we worked together to prep from House Olympics. The entire Winslow family learned how to solve a Rubik’s cube and the spirit in the House was high, even amidst a busy season for sports championships and exams. The sun came out for us on Sunday, as we competed for the last time this year in a myriad of fun activities! We then dressed up for the annual “SMOscars” celebration, a fancy dinner for all of boarding and some awards were presented — Congrats to Charlize and Lizzy! It followed into a House-wide Dance Party! What a fun way to wrap up the month of May and kick off our last few weeks together before summer break!